All events
April 12, 2019 on Cosmonautics Day, on the basis of JSC «ONPP «Technology» named after A.G. Romashina» held an expanded meeting of the Association «Cluster of Composite and Ceramic Materials» (Cluster «AKOTECH») 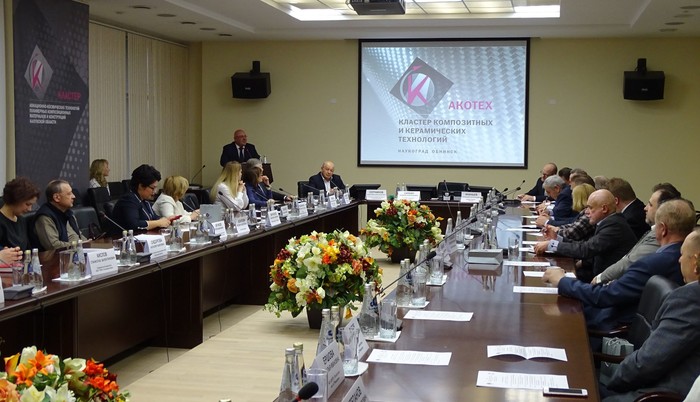 The enlarged meeting was timed to coincide with the fifth anniversary of the Cluster.

The meeting opened and was greeted by the Director General of JSC “ONPP“ Technology ”named after A.G. Romashina »Silkin Andrey Nikolaevich.

The meeting was attended by over 30 people, including Deputy Head of the Administration of Obninsk G.E. Ananiev, Chairman of the Board of Directors of JSC Signal Instrument Plant V.Ya. Rodionov, General Director of JSC Innovation Development Agency - Cluster Development Center Kaluga Region ”A.A.Sotnikov, Acting Director of the State Public Institution KO“ Directorate of Obninsk Technopark S.S. Lukyanenko, representatives of the Ministry of Economic Development of the Kaluga Region and the Union of the Chamber of Commerce and Industry of the Kaluga Region ”, as well as 12 representatives Clusters The invited guests praised the five-year work of the Cluster and its significance for the city and the region: it supports the activities of small and medium-sized enterprises, introduces innovative products from composite and ceramic materials to the market, new jobs for the city, etc.

The Executive Director of the Association O.V. Koval presented a report on the results of the cluster over the past 5 years and the prospects for its further development. For the period 2014-2018 the number of cluster members reached 21, the total annual revenue increased more than 2 times, the number of employees of the Cluster enterprises increased 2 times. The Cluster Development Program for the period 2019-2022 has been updated.

During the report, the development directions of the Cluster were also presented, among them:

In February 2019, activities were completed to amend the constituent documents of the Cluster and change the name.

At the end of the meeting, certificates were awarded to the new residents of AKOTECH Association. Certificates were received by representatives of two enterprises: LLC RASTR-technology and LLC Modern Technologies.

Following the meeting, members of the Association adopted a unanimous decision on the recognition of the results of the Cluster for 2014-2018. positive.